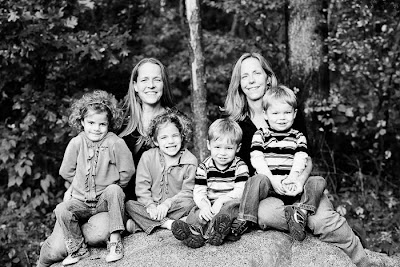 I just stumbled across your article on identical twins, and I thought my story was worth sharing.

I’m an identical mirror twin. My twin sister Jenn and I have many mirror image traits that are pretty cool, such as the fact that she’s a lefty, I’m a righty, she’s near sighted, I’m far sighted. I have a widow’s peak, she doesn’t. And so on. We had DNA testing to confirm our zygosity back in 2006. Here’s some other unique parts to our twin story:

In 2006 I gave birth to twin girls, Georgia and Quinn.

I was told throughout my pregnancy that my girls were most likely fraternal because they each had their own placenta and cord. There was a 20% chance they would be identical. But when they were born, and the days that followed, I could barely tell them apart. We did the DNA testing on my girls when they were about 9 months old, when Jenn found out she was also having twins. They knew early on that hers were identical due to all the sharing they were doing!

I wanted to forward a recent picture of the 3 sets of twins. My sister has an older daughter, and I have 2 older boys...all our of kids are genetically half siblings...kind of cool, and creepy at the same time! ;) I love being a twin, and I understand your envy! ;) Jenn is my best friend, we consider ourselves very lucky that our egg split! ;)

I would love to hear if you’ve come across another set of identical twins, who have also had identical twins. I haven’t found a story yet! Thanks for your time!

If you have a twin story, drop me an email, or post a comment on one of these threads.
Posted by j at 9:39 PM

Your on-topic comments are welcome!

The following types of comments will be deleted from this thread: